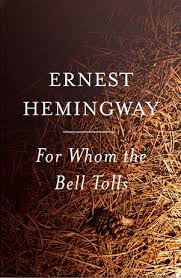 “Today is the only one day in all the days that will ever be. But what will happen in all the other days that ever come can depend on what you do today.”

What an amazing thought by Hemmingway!

For Whom the Bell Tolls by Ernest Hemmingway is a fantastic read. In fact, it is the first book I have awarded five stars on Goodreads (FYI: there’s a link to my Goodreads account somewhere on this website).

I particularly enjoyed the story as it takes place during the Spanish Civil War – an event I previously knew nothing about. It does take a wee while to adjust to Hemmingway’s style of narrative, as he flits between perspectives, often in the same paragraph, and uses punctuation sparingly. However, once you get used to his style, For Whom the Bell Tolls is incredibly easy to read. There are also many instances where the protagonist, Robert Jordan, talks to/argues with himself, and Hemmingway writes these dialogues as single chunks of prose. As this is the first novel by Hemmingway I have read, I can’t tell you yet whether the style is characteristic of his work in general or just of For Whom the Bell Tolls. As soon as I have read another of his novels, I will let you know.

The story is set in the mountains of Spain during the Spanish Civil War and tells the story of Robert Jordan, an American citizen and former professor of Spanish, who is fighting with a group of left-wing guerrilla fighters against General Franco and his military dictatorship. Jordan arrives on the scene tasked with blowing up a key, strategic bridge in order to facilitate a planned offensive by the Russian-backed “Republic”. The story also includes a fabulous array of characters, including the shifty, former cell leader, Pablo, the matriach, Pilar, and Jordan’s beautiful but emotionally and physically – scarred lover, Maria.

I won’t give any more of the story away, as the novel is definitely worth reading and I wouldn’t want to spoil the enjoyment for anybody. The story was also adapted for the big screen in 1943, starring Gary Cooper and Ingrid Bergman. One of these days I will watch the movie; however, I did watch the trailer on Apple TV on the weekend and it looks very dated. Still, mustn’t pre-judge!

I am now reading E.M.Forster’s A Passage to India. So far, so good!

UPDATE ON MY NOVEL:

I am now well underway with my second draft and, taking the suggestions from the editor into account, it is already sounding much better. I aim to have my second draft finished by the autumn. Perhaps by this time next year I’ll have something to show you all. Fingers crossed!